It's like getting a whole extra day in Seoul! 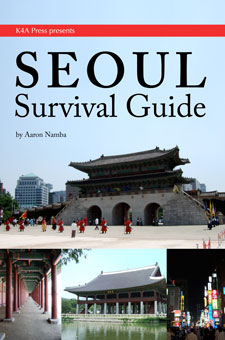 Planning a trip to Seoul, Korea?

Most visitors to Seoul have a wonderful time, but nearly all experience a common problem: Seoul travel books are full of serious errors!

It's not the authors' fault. Seoul is over 600 years old, but life moves quickly! Fashion, social norms, laws and even buildings and subway lines are changing constantly. The Seoul Survival Guide is published twice a year, and each new edition contains dozens of updates. Typical travel books go years between editions, and can develop serious errors very quickly, sometimes even before they hit shelves.

Avoid the frustration of wasted time and money by supplementing your travel book with a copy of my Seoul Survival Guide. With less stress, plus the time and money you'll save, it's like getting a whole extra day in Seoul! Spend your time enjoying the food and culture, not on the mundane details of getting cash and navigating public transportation.

Save Time and Money

The Seoul Survival Guide has been mercilessly edited to just 40 pages of useful, relevant information. It's easily read in an airport terminal, and compact enough to carry with you throughout your trip.

Follow this book's money-saving tips and the book will pay for itself within your first 12 hours in Seoul.

Learn what you should do before leaving the airport; where and when to exchange money; which mode of transportation is best; where to eat and shop; how to get online. Each section includes useful words and phrases, both romanized (so you can say them yourself) and written in Korean (so that you can point to them). If you have a spare hour or two, you can even learn to read Hangul, the Korean alphabet.

What do typical travel books get wrong?

Typical travel books not only accumulate errors, but are also forced to omit many topics that are essential, but simply can't be covered because they are rapidly evolving.

By way of example, the best Seoul guide book available today, Seoul Selection Guides: SEOUL (which I own and recommend), was last updated in June 2011.

What's changed since then? Oh, just a few things:

Since this book and others like it must remain relevant for several years, they cannot fully cover:

To bridge this gap, I created the Seoul Survival Guide. It will always include the very latest information, updated at least twice a year. However, my book does not contain detailed information on where to go and what to do.

Thus, I recommend buying both books (and so does Amazon, if you look under "Frequently Bought Together").

Know someone about to visit Seoul? A print copy of the Seoul Survival Guide makes a great gift. I also recommend Seoul Selection Guides: SEOUL.

Know someone about to visit Seoul? A print copy of the Seoul Survival Guide makes a great gift. I also recommend Seoul Selection Guides: SEOUL.